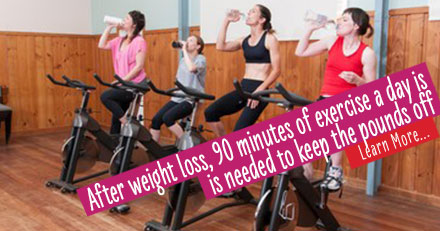 Exercise essential to keeping weight off after dieting, says nutritionist

Dieters who have managed to shed their excess weight need to do 90 minutes of exercise a day to keep the pounds off in the long term, according to a study. The finding comes as a leading nutritional researcher called on world leaders to tackle obesity with the same urgency as global efforts to tackle climate change.

Rena Wing, professor of psychiatry and human behaviour at Brown University, told the American Association for the Advancement of Science meeting in Boston yesterday that exercising 60 to 90 minutes a day was essential to long term weight loss. By studying data on more than 5,000 men and women who have, on average, lost 70 pounds and kept the weight off for six years, she found that successful dieters had high levels of physical activity and consciously controlled their eating habits. This meant frequent weighing, following a consistent diet across the week and taking quick remedial action at the first sign of weight gain.

“There’s no way around it,” Wing said. “If you want to lose weight and keep it off you need to really change your lifestyle, particularly if you’re overweight or have a family history of obesity. The obesity epidemic won’t go away simply because people switch from whole to skimmed milk. They need to substantially cut their calories and boost their physical activity to get to a healthy weight – and keep minding the scale once they do.”

In Britain more than one-fifth of adults are obese and, of the remainder, half of men and a third of women are overweight. Obesity is linked to heart disease, diabetes and premature death. By 2015, 2.3 billion adults are forecast to be overweight, including 700 million obese.

Philip James, of the International Obesity Taskforce, told the seminar urgent steps were needed to transform the environment that makes people fat. James, who chaired the UN Commission on the Nutritional Challenges of the 21st Century, said obesity was a problem for all of society, arguing that blaming individuals for their vulnerability to gain weight was no longer acceptable when the “environment in which we live is the overwhelming factor amplifying the epidemic”.

He added: “It is even more naive to tell people that they just need to make a little change in their eating habits or their daily activity and suddenly the obesity problem will be remarkably easily solved.”

A big challenge for the food sector would be to transform its products to reduce the promotion and abundant array of high energy foods, he said.

Keeping Weight Off Takes More Exercise Than You Think

Let’s face it: losing weight requires hard work, and keeping it off can be even harder. If you’ve lost weight and want to keep it off, that oft-recommended 30 minutes of physical activity mustered a few days a week just ain’t going to do the trick.

New research published in the current Archives of Internal Medicine confirms that women who want to sustain substantial weight loss need 55 minutes of dedicated physical activity five days a week on top of their normal daily activities to keep weight from creeping back.

In the new study, John Jakicic, associate professor and chair of the department of health and physical activity at the University of Pittsburgh, placed 201 overweight and obese women who were enrolled in a weight-loss clinic into four groups with different combinations of physical activity amount (some burning 1,000 calories a week, others burning 2,000, depending on how much they weighed at the start of the study) and intensity (moderate versus vigorous).

All were told to eat between 1,200 and 1,500 calories per day. Participants attended group meetings to talk about strategies for changing their eating and exercise habits. The intervention team checked in with telephone calls throughout the two-year study period.

The women were given treadmills to use at home (nice!); their other daily physical activities (such as walking from the bus stop to the office, climbing stairs, and the like) were taken into account.

But about a quarter of the women managed to lose 10 percent of their weight and keep it off. These women had taken part in more of those telephone calls, adopted more of the new eating behaviors aimed at weight control, and eaten less fat than the women who didn’t keep the weight off. They also moved around lots more, exercising for an average of 275 minutes a week, or 55 minutes for each of 5 days.

55 minutes may sound like a lot of activity to those who have trouble hoisting themselves off the couch for any minutes, any days per week. But for those of us who have struggled to combat chub-creep even when we exercise a lot, every single day, these findings come as no surprise.

Jakicic says that the recommendation for 30 minutes of physical activity several days a week is aimed at general health, not at weight loss or maintenance. He says this study’s findings are right in line with the government’s recommendations, but they don’t sound as daunting. “We’re saying ‘Do your normal lifestyle activities plus 55 minutes of purposeful activity,'” he explains. “We’re giving people credit for the activities they do anyway.” It still adds up to 80 or 90 minutes, he says, “but we’re not selling it as 90 minutes” so as not to scare people off.

(By the way, Jakicic admits he’s “not a firm believer” in the value of housework as a weight-loss or -maintenance activity. “You should clean your house anyway,” he says. Better to step up your daily walking or biking routine, he suggests.)

An accompanying editorial notes that the study shows it’s hard to maintain a program of 55 minutes’ activity a day, even when someone gives you a treadmill and calls you every so often to remind you to use it. The editorial, written by Warren Thompson of the Mayo Clinic College of Medicine and James Levine, designer of the Walkstation, further observes that the study’s requisite amount of physical activity “can be achieved through a combination of strategies, including increased formal exercise, a modified work and school environment that allows for movement while working and learning, and a modified home environment with less television and more movement. Further research in sustainability of activity is urgently needed if we are to solve the obesity epidemic.”

Have you lost weight — and kept it off? How long do you need to stay on the treadmill (or whatever) for it to make a difference in keeping weight gain at bay? And what kinds of daily lifestyle activities do you think are most effective at keeping you trim?