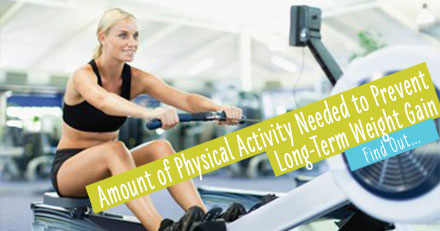 Among women consuming a usual diet, physical activity was associated with less weight gain over 13 years only among women of normal weight, according to a new study.

The researchers also found that women successful in maintaining normal weight averaged approximately 60 minutes a day of moderate-intensity activity throughout the study.

The prevalence of overweight and obesity in the United States has increased dramatically over the past 2 decades, with 1 in 3 adults currently obese. “Because the average U.S. adult gains weight with age, developing ways to prevent unhealthful weight gain would help them avoid having to lose weight and then trying to maintain that loss. Compared with the vast body of research on the treatment of overweight and obese individuals, little research exists on preventing weight gain,” the authors write. “The amount of physical activity needed to prevent long-term weight gain is unclear.”

I-Min Lee, M.B.B.S., Sc.D., of Brigham and Women’s Hospital and Harvard Medical School, Boston, and colleagues examined weight changes associated with different physical activity levels in a study that included 34,079 healthy U.S. women who consumed a usual diet (average age, 54 years) from 1992-2007. At the beginning of the study and at years 3, 6, 8, 10, 12 and 13, women reported their physical activity and body weight. Women were classified as expending less than 7.5, 7.5 to less than 21, and 21 or more metabolic equivalent (MET) hours per week of activity at each time. Analyses examined physical activity and weight change over intervals averaging 3 years.

“There was a significant interaction with body mass index (BMI), such that there was an inverse dose-response relation between activity levels and weight gain among women with a BMI of less than 25 but no relation among women with a BMI from 25 to 29.9 or with a BMI of 30.0 or higher. A total of 4,540 women (13.3 percent) with a BMI lower than 25 at study start successfully maintained their weight by gaining less than 5.1 lbs. throughout. Their [average] activity level over the study was 21.5 MET hours per week ([approximately] 60 minutes a day of moderate-intensity activity),” the researchers write.

“These data suggest that the 2008 federal recommendation for 150 minutes per week, while clearly sufficient to lower the risks of chronic diseases, is insufficient for weight gain prevention absent caloric restriction. Physical activity was inversely related to weight gain only among normal-weight women; among heavier women, there was no relation, emphasizing the importance of controlling caloric intake for weight maintenance in this group.”