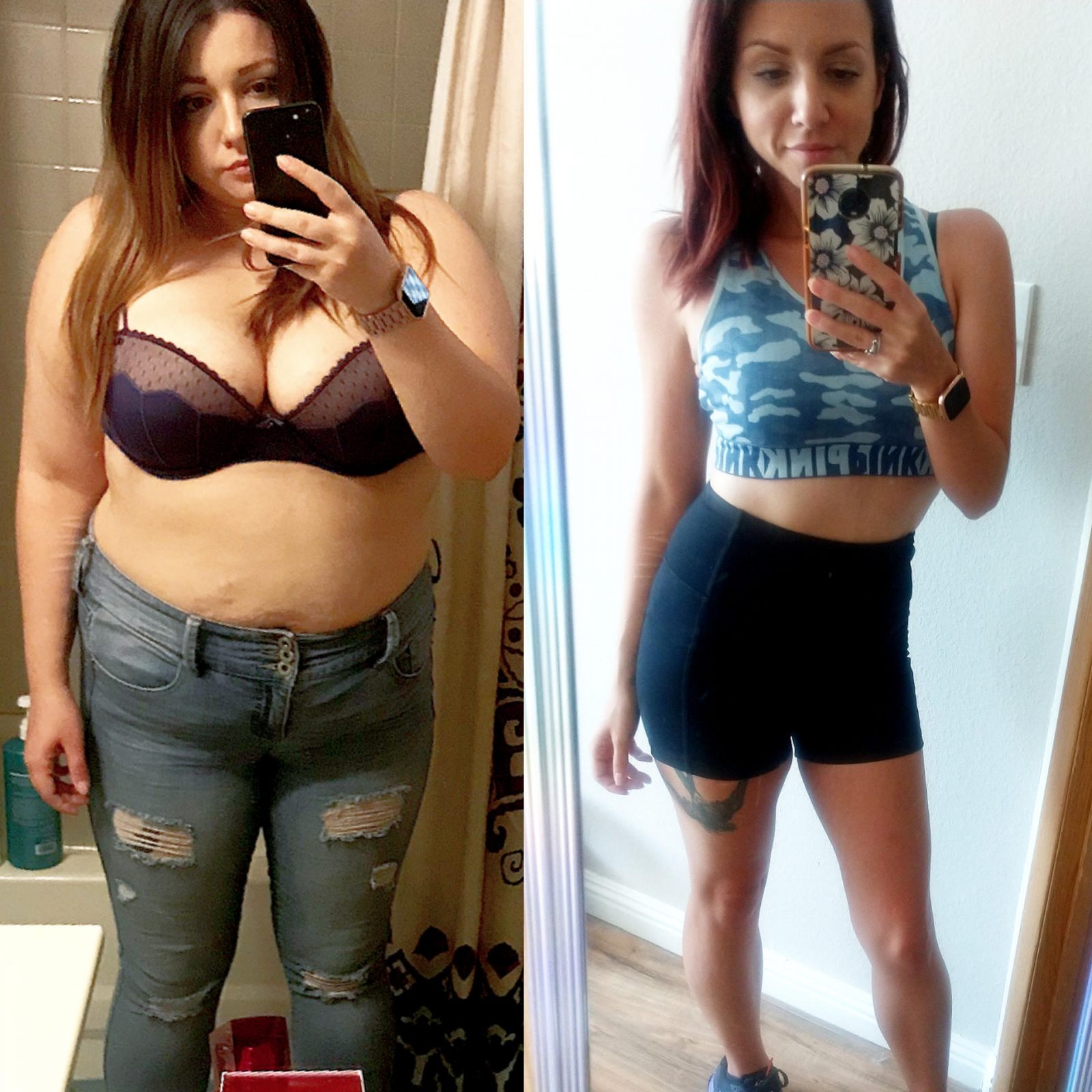 I’ve struggled with my weight most of my life. My parents were both worked full time so there was a lot of on the go/convenience eating. I’ve been overweight since I was 8 years old and I remember it was around this time I began to understand the idea of dieting and my life became a series of starving and uncontrollable overeating cycles. Then in my late teens and early 20’s I also struggled with drug and alcohol addiction so fitness and nutrition wasn’t very high up on my list of priorities.

HOW DID YOUR WEIGHT AFFECT ANY ASPECT(S) OF YOUR LIFE?  My weight affected my ability to socialize. I have active friends who wanted to hike or wakeboard out on Lake Mead for instance and although I tried a few times to join the embarrassment I would feel when I couldn’t keep up prevented me from joining them in future plans. However the worst experience was attempting to date for the first time after getting clean and sober.

WHAT WAS THE “TURNING POINT” THAT GOT YOU STARTED ON YOUR WEIGHT LOSS JOURNEY?  In July 2018 I was weighed at the doctor’s office at 208lbs. At 5’3″ that was an excessive amount of weight for my body to be carrying around. I was devastated and I felt defeated, there was so much in my life to be happy about but all I could think about was that number on the scale, how increasingly difficult it was to do everyday activities, and how unmotivated I was because the journey to healthy weight seemed basically impossible. I had put on 40lbs within 2 months of quitting drugs and alcohol and I remember I was talking to someone online everyday for about a month and it felt like we had clicked on every level. I finally agreed to go on a date and when we had met in person it was so uncomfortable, I could feel his disappointment and I remember wanting to cry during the awkward silences throughout our date. I will never forget the next day when he texted me and said “I like absolutely everything about you but unfortunately I can’t get passed the fact that you’re overweight.” looking back now I don’t blame him, you simply cannot pick and choose what you’re personally physically attracted to but, I remember at the time feeling like people were kinder to me when I was thinner and addicted than when I’m clean and heavier. That thought had hurt immensely but it simply wasn’t true in retrospect if there is anything that my journey had shown me was that sober Erin is a force to be reckoned with and she was about to change everything about her life.

HOW DID YOU GET STARTED?  I had gotten a job as a medical transporter and it required me to be on my feet a decent amount. And while I would wait for my next dispatch I’d get bored sitting in the van so I’d walk around a bit this went on for about 2 months.

Then one day my mother sent me a photo of me on my 26th birthday 4 months prior and said you’ve lost weight. I took a photo of myself and put them side by side and I COULD SEE A DIFFERENCE. This was incredibly encouraging and further prompted me to stop drinking soda and make other small diet changes.

In January of 2019 I had gotten a desk job but I was so excited about the progress I’d been making that I was fearful a sendentary job would undo all of my hard work, thats when I dusted off my old fitness tracker and actually started wearing it. I started getting up at 4:30 am to get to the gym before work. I’d walk maybe a mile or two and then I started jogging at first I was only able to do it for 4 minutes and within 2-3 months I was jogging 4-5 miles 4-5 times weekly

HOW LONG AFTER YOU STARTED DID YOU BEGIN TO SEE RESULTS OF YOUR WEIGHT LOSS EFFORTS?  I personally didn’t notice it until my mom had sent me a photo of myself on my 26th birthday 4 months later and I compared it to a current photo using a collage app. I did not weigh myself for the first 9 months of my weight loss journey because in the past I had found it to be immensely discouraging, often prompting me to quit trying. I kept my head down and kept working and a year later when I had weighed myself I was 128. 23 months later I’ve managed to drop an additional 10lbs and maintain my weight of 118lbs.

WHAT WAS THE HARDEST PART?  I went through the first year of my weight loss journey while simultaneously enduring my first year of sobriety from drugs and alcohol which was challenging but I firmly believe diet and exercise helped me achieve long term sobriety as it gave me of and control in my early days when everything felt so beyond my control. I was feeling and learning to process a lot of emotions I had not felt in years and my weight loss journey was something positive to focus on and continue to strive for and was a tremendous help in creating new and healthy routines, hobbies, and habits that coincided and promoted a clean and sober lifestyle.

DID YOU EVER WANT TO GIVE UP? WHAT KEPT YOU GOING?  To be honest, a lot of misdirected frustration and anger. During my first year of being sober I was hurt by a lot of things that I didn’t know how to process appropriately. getting on that treadmill while thinking about something that angered me, blasting my music and running as a fast I could calmed me down. I knew the odds were against me, I knew there were people who doubted me and I wanted nothing more than to prove them wrong. My life began to feel like a Rocky montage, and overtime those feelings of anger and hurt that initially pushed me to make changes were replaced with self love and admiration for what I was doing. I was beating the odds, I was changing for the better one day at a time and for the first time in my life I was so proud of who I was becoming.

DID YOU HIT ANY WEIGHT LOSS PLATEAUS? HOW DID YOU OVERCOME THEM?  No, because as time went on it was no longer about a size, number on the scale etc. It became a lifestyle change. While losing weight was fantastic it wasn’t something I was solely focused on which I think granted me the patience and perseverance to continue on with what I was doing without a lot of frustration.

HOW LONG DID IT TAKE YOU TO LOSE MOST OF THE WEIGHT?  I lost 80lbs out of the 90lbs within the first year.

DID YOU HAVE ANY NON-SCALE VICTORIES?  Too many to count. My mood is elevated, I learned to prioritize my personal self care, I’ve summited many of the trails at Red Rock Canyon, according to my Fitbit since I started my weight loss journey 23 months I’ve walked a cumulative total of 2,500 miles enough to walk from current residence in Las Vegas NV to my hometown in Long Island NY. I’ve prioritized my sobriety and received my 2 year sober chip back in May of 2020. This was the first summer I have ever worn a 2-piece bathing suit in my life and that felt amazing. I’m not self conscious to try new physical activities/fitness classes.

WHAT DOES YOUR DAILY DIET LOOK LIKE COMPARED TO WHEN YOU WERE HEAVIER?  I used to see food as a reward, comfort, or indulgence. It was one of the only things I looked forward to during the course of my day. I ate mostly fast food and even when I would attempt to eat healthier (i.e. luna bars, oikos yogurt, granola) looking back I realized even these so called “healthy options” were LOADED with sugar. I was also a soda fanatic. I would drink a double gulp of doctor pepper 4-5 times a week.

HOW DOES YOUR PHYSICAL ACTIVITY COMPARE TO WHEN YOU WERE HEAVIER?  I was sedentary when I was heavier. Every so often I would get into these cycles where I would decide I was going to lose weight very quickly and I would be at the gym every single day without a break for a week and crash diet only to weight myself at the end of the week find out I was only .25-.5 of a pound lighter and immediately quit.

I went very slow and steady this time around in regards to my weight loss journey and it worked. Now I love running because it elevates my mood and gives me energy when I’m feeling a bit sluggish. I hike/scramble almost every weekend during the fall/spring months. Before eating used to be my social activity I did with my friends and now it’s hiking, kayaking, bowling. Physical activity has engrained itself into my social life. I started out my fitness journey getting about 120 active minutes a week and built onto over the course of several months and now I will average between 450-550 weekly active minutes.