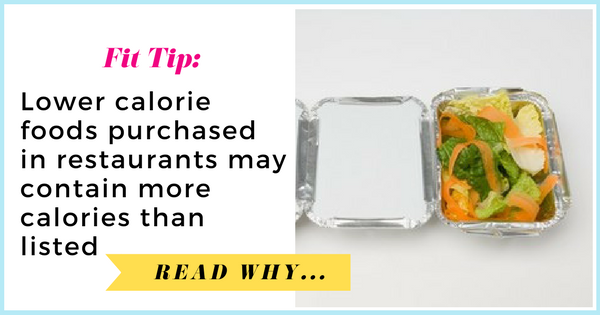 Disclosing the calories in restaurant foods to customers holds promise as a strategy to lower the nation’s obesity rate. However, a new study of food items from national chain restaurants found that while stated calories on restaurant menus and websites were accurate on average, 19% of individual samples differed from laboratory measurements by more than 100 calories and lower calorie foods tended to contain more than listed.

“On average, the food items measured ten calories higher than the restaurants’ stated calories. That’s essentially accurate,” says senior author Susan B. Roberts, PhD, director of the Energy Metabolism Laboratory at the USDA HNRCA. “However, 19% of food items contained at least 100 calories more than listed, which suggests calories for individual foods can be unreliable. One item contained 1000 calories more than listed.”

The authors’ laboratory measurements also indicated that lower calorie food items purchased in sit-down restaurants tended to have more calories than listed. For example, based on the data, the researchers were able to predict a sit-down restaurant item listed as approximately 300 calories, and therefore potentially suitable for weight loss or prevention of weight gain, could contain approximately 90 calories more than listed.

Additionally, items often viewed as healthier from both sit-down and fast food restaurants, such as salads and soups, tended to have more unreliable calorie listings.

“We were pleased to see that average calorie listings are accurate,” says Roberts, “but we think it is very important that lower calorie foods not contain more calories than listed because such foods are purchased by people trying to control their weight. They will find that harder to do if they are eating more than they think.”

Roberts and colleagues also report the stated calories listed for fast food tended to be closer to laboratory measurements than the stated calories of items purchased in sit-down restaurants. “Our data suggests the difference may be related to quality control in the kitchen,” says Roberts, who is also a professor at the Friedman School of Nutrition Science and Policy at Tufts University. “Sit-down restaurants typically rely on workers to prepare food on-site, whereas most fast food is portioned out by factory machinery.”

“Restaurants can play a powerful role in anti-obesity efforts if stated calories are accurate,” Roberts continues, “because food purchased in restaurants accounts for one-third of the average American’s daily food intake. Examples of ways restaurants could help would be to increase the number of foods that calorie listings are provided for, make sure that lower calorie foods do not contain more calories than stated, and offer a wider selection of lower calorie items.”