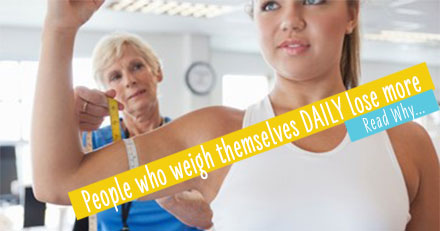 Dieters, step on your scales! (DAILY)
By Rosie Mestel, LATimes.com

Losing weight is hard – and you might say hardly studied. Only recently have scientists clinically shown that the widely used Atkins diet actually works, and they’ve yet to definitively weigh in on another diet-related question: Does regularly stepping on the scales help a dieter lose weight?

Sure it does, say many weight loss experts. Weighing yourself is a clear way to monitor progress or catch (and nip in the bud) a slow, steady uptick in lardage. Not so fast, say others. The glacially slow nature of weight loss, plus those spiky daily fluctuations in body weight, might actually make dieters more apt to throw in the towel.

Now, just in time for the waist-expanding holiday season, a new study has come down on the side of daily weigh-ins. Published in the December issue of the Annals of Behavioral Medicine, it reports that dieters who weighed themselves regularly shed more pounds over a 24-month period than people who didn’t regularly weigh themselves. Those who weighed themselves daily lost the most.

To the authors, the implications are clear: Dieters should be encouraged to weigh themselves – and often.

Yet there’s a chicken-egg caveat here that some critics point to and that even those who believe in the findings acknowledge. Sure, successful dieters may weigh themselves more. But the studies don’t tell you what caused what – just that the two things correlate. It’s fun to step on the scales when you’re succeeding. When the numbers are nudging upward or stubbornly refusing to change

“They’re assuming that weighing yourself frequently leads you to lose weight. I think losing weight makes you weigh yourself more frequently, because – ‘I’m losing weight, yes, yes, I’m down another pound,’ ” says Janet Polivy, a professor of psychology and psychiatry at the University of Toronto, who is not a fan of the bathroom scales.

That confusion is why, to this day, you’ll sometimes get roomfuls of PhDs and MDs sitting around discussing an issue you’d think 21st century science might have put to bed by now.

A curious study from the 1960s points to the potential effect of frequent weighing. Eight overweight women in a small private college were enrolled in a weight loss plan, part of which consisted of coming in to be weighed four times a day. By study’s end the women had lost an average of 40 pounds each.

The study was small; it lacked important controls. But it was intriguing. “People in that group lost more weight than any study since then in nearly 40 years,” says Dr. Joseph A. Risser, director of clinical research for Lindora Medical Group, which runs the Lean for Life weight loss program.

The scales couldn’t possibly have registered real loss from one weigh-in to the next – but maybe, Risser muses, something else was going on, such as a reminder of the mission the dieter was on. His own studies of more than 600 clients show that those who were weighed five times weekly lost more weight (24 pounds) than those weighed twice weekly (19 pounds).

The new study by Linde and colleagues tapped statistics from two populations. One was a group of 1,800 obese or overweight adults enrolled in a weight loss trial. Participants were asked at the study’s start and at intervals thereafter how often they weighed themselves.

People who weighed themselves also did other healthy things such as exercise more, but the self-weighing effect was statistically significant on its own, Linde says.

James O. Hill, director of the Center for Human Nutrition at the University of Colorado, says the findings fit with a registry of adults who have lost at least 30 pounds and (even more impressive) maintained that weight loss for a year or longer.

A key thing those succeeders report, Hill says, is regular self-weighing – at least weekly, and often daily. (They also have an emergency plan of action for when the reading creeps above a crucial number of pounds.)

Focusing on the long term

Psychologist Patrick M. O’Neil, director of the weight management center at the Medical University of South Carolina in Charleston, says he’s a strong proponent of daily weigh-ins, based on Hill’s data and his own clinical experience – but that the practice should be paired with a weight chart that focuses on trends, not short-term, zigzag fluctuations.

“It’s sort of like tracking stock prices,” he says. “You know they’re going to vary day to day.”

Regular weighing is one thing. But every single day? After all, hormonal changes, fluid intake, sweating, medications and salt intake cause day-to-day, hour-to-hour differences in body weight of up to several pounds.

At Jenny Craig and Weight Watchers, dieters weigh in each week with their personal consultants or at meetings. “We encourage them to take a break from daily weigh-ins because weight fluctuates,” says Jenny Craig spokeswoman Gail Manginelli. “It can be demoralizing.”

Meanwhile, there are some specialists who think either daily or weekly scale-hopping may have downsides. Psychologists and psychiatrists who treat patients with eating disorders note that encouraging people to weigh themselves might exacerbate such pathologies.

Other scale-doubters, such as psychologist Michelle Dionne of Ryerson University in Toronto, believe self-weighing can also be counterproductive in psychologically healthy folks who just want to shed some poundage.

Among the studies she points to: ones in which students were brought into an experimental clinic and weighed – but on fixed scales that actually recorded their weights as heavier or lighter than they truly were.

Students led to think they were 5 pounds heavier than they had thought scored significantly lower on psychological scales measuring mood, selfesteem and body satisfaction.

In one of the studies, students were also provided with a tasty snack right after the weigh-in – and the ones who’d been bamboozled into thinking they were heavier than they were ate significantly more of that snack.

“I would suggest there are some people who are going to receive really helpful feedback and reinforcement from self-weighing,” Dionne says.

Experts debate how students given false information in a lab relate to real-life dieters using scales to monitor their progress. But even proponents of weighing advocate restraint. “I don’t think anyone in a responsible professional position has argued for weighing oneself more than once a day,” says O’Neil. “We do not want to encourage people to turn this into a fetish.”

If you do weigh in

With that caveat in mind, here are some tips from various specialists about the best way to weigh yourself if you choose to.

* To minimize variation, always weigh at the same time of day, such as in the morning just after having used the bathroom.

* If you are weighing yourself daily, understand that your weight will vary day to day. It’s the trend that’s important. You may find it useful to make a graph of your weight.

* Put the scale on a flat, uncarpeted surface so the readings don’t wobble.

* Use a scale that is consistent, giving the same weight when you step on, then off, then on again. That’s more important than the type of scale you buy. Use the same scale each time.

* Don’t get fixated on the scale. Monitor your body change in other ways, such as the fit of your clothes, a tape measure or how you physically feel.

* To the best of your ability, try to gauge how the weighing makes you feel, and if it is reinforcing – or undermining – your efforts.