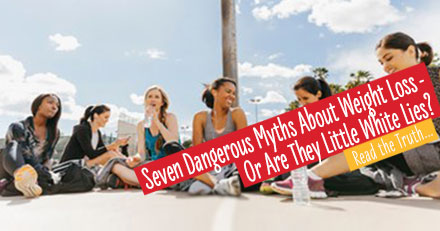 The cover copy of a thousand magazines was attacked this morning in the august pages of the New England Journal of Medicine by Krista Casazza, David B. Allison, both from theUniversity of Alabama, Birmingham, and a long list of co-authors. Much of what you’ve been told about weight loss is wrong and, in the current style of journalists everywhere, they break these misconceptions down into a list of widely-held myths, which they then attack with dry academic savagry.

Maggie Fox at NBC, who did a wonderful write-up of the New England Journal article, points out that a lot of the authors disclose financial ties to drug or device makers. She quotes NYU’s Marion Nestle saying that the study only makes sense if “the only things that work are drugs, bariatric surgery, and meal replacements, all of which are made by companies with financial ties to the authors.” The worry is that this is just another way to deliver patients toAllergan, which makes the Lap-Band surgical device, or Vivus and Arena Pharmaceuticals, which make newly approved obesity drugs.

There’s a point to that. I’m a great believer in clinical trials, but it’s always important to remember that just because a clinical trial does not show an effect doesn’t mean that effect doesn’t exist — although it always means that effect is smaller than you hoped. Every single one of these myths seems likely to me to have seemed like a little white lie when told by an individual doctor to an individual patient. Saying that just dieting and exercising a little helps likely gets a lot more patients dieting and exercising; likewise, patients are probably less scared by the prospect of gradual weight loss; breastfeeding may prevent infection and raise IQ; telling people sex can be part of their workouts can be encouraging.

But I agree with the authors that, on a larger scale, these myths are harmful: because we can’t set good public policy about obesity if we’ve convinced ourselves that approaches that work don’t. And although I’m not sure how perceiving these myths as true would impact peoples’ weight loss (the myths wouldn’t help, but I’m not sure they hurt) the way we repeat them almost certainly leads to a sense that scientist understand weight loss far better than they do. On the flip side, there is undoubtably a benefit to keeping the conversation about weight loss going in an appealing way — that’s exactly why people in white lab coats tell little white lies. The problem facing us, is, essentially,the Dr. Oz problem: how do we have an appealing conversation about health without repeating balderdash? This is one of the big problems of medicine, and we are not close to solving it.