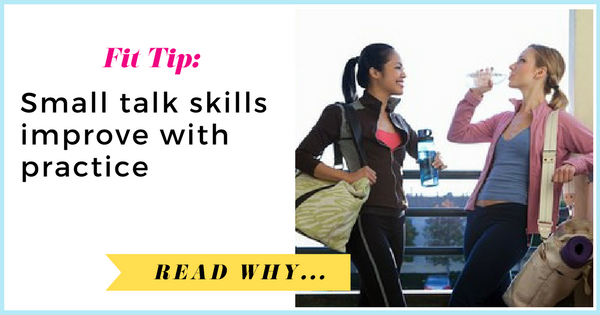 Small talk is far from “small” or trivial, says psychology professor and shyness expert Bernardo J. Carducci. It is the salve of a disconnected society — the “cornerstone of civility.”

“Small talk is really, really important. It helps us connect with people, and not just at holiday gatherings,” said Carducci, director of the Shyness Research Institute at Indiana University Southeast. “If you make connections with people, it makes it much more difficult for you to treat them in an uncivil way. If you think about being kind to and connecting with people, people you engage in conversation, you’re going to open a door for them, you’ll let them step in front of you in line. You’ll engage in more acts of kindness and fewer acts of rudeness.”

“Small talk is important, particularly now when we have people retreating into their own electronic bubbles, their own worlds, where they can get whatever they want on their own terms. The people who are happiest and most influential have the strongest social network, social capital.”

*Start small. “I like to talk with anybody,” Carducci said. “I’ll talk with a soft drink machine just to practice. I call it ‘quick talk.'” It might be a simple greeting or a compliment and then the moment passes. “We’re creatures of habit, we see the same people all the time, so that compliment turns into a smile, a more extensive greeting, which can turn into a conversation,” he said. “That’s how you build social networks.”

*Aim for nice, not brilliant. “People think you need to be really funny, witty; you just have to be nice. It sounds trite. You have to be willing to talk to others.” Carducci said a good way to practice is to find someone who’s alone, such as at a party or at school, and begin a conversation.

*Have something to say. Bad conversationalists typically insist they have nothing to say. More likely, Carducci said, is they are highly self-conscious, which makes them incredibly self-critical. He recommends “social reconnaissance,” making a conscious effort to learn about current events, the local area and local issues in order to have topics to discuss. People shop a lot during the holidays, for example, so think of some shopping- or gift-related experiences or observations that can be discussed. Reading newspapers and catching up on major sporting news are two examples of ways to “prime the pump.”

*Rehearse your introduction. “When people meet you for the first time, they’ll want to know two pieces of information: your name and something about you,” Carducci said. “Be prepared to offer information that will help move the conversation along — typically something about what you do or how you know the people in the social situation, what brings you there. Think about it ahead of time. It shouldn’t be too long but needs to be long enough to get people going. ‘I work at the mall,’ isn’t long enough. ‘I sell cell phones at the mall. You won’t believe some of the reasons people want them,’ starts a conversation.”

*You’re late? Big mistake. “If you walk in and everything is already buzzing, you’re already behind,” Carducci said. “Groups have already formed. If you get there on time, you’re greeting people and pacing the conversation. You bring the new people into the conversation — ‘I’m so and so, and this is A, B and C., and we were just talking about …”

*Extend the conversation. Conversations can evolve from one topic to another. A conversation about shopping, for example, can shift to someone you met at the mall who was from Florida, to favorite experiences in the Sunshine State. “That’s when conversation really starts to flow, because you’re no longer thinking about yourself — how you look and sound — you’re thinking about ‘How do I build on this.’ You focus on the task at hand.”

*Now, stop talking. “Favorite topic” arises when someone talks at length (five to 10 minutes or longer) about something that interests them, but not necessarily everyone else. To avoid dominating the conversation, stop periodically to give others a chance to change the topic. “Poor conversationalists might feel like they’re on a roll and get excited, and not realize they’re dominating. If people are interested, they’ll ask questions when you stop.”

*Help yourself and others with “quick talk.” Talking with lots of people for brief periods of time can take pressure off both parties in a conversation. Say, ‘I’ve got to go; there are a couple of people I need to talk to. We’ll talk again later.’ This helps people avoid dominating conversations while also demonstrating they are capable of talking with a variety of people.

Small talk becomes easier with practice — and uneasy conversationalists should start a week in advance of a party or activity. This gives them time for “social reconnaissance” and to practice jokes and discussions with family and friends. But they shouldn’t wait for a party to practice.

“It’s like exercise,” Carducci said. “If you can build it into your daily routine, you’re healthier. The more you do it, the easier it becomes.”