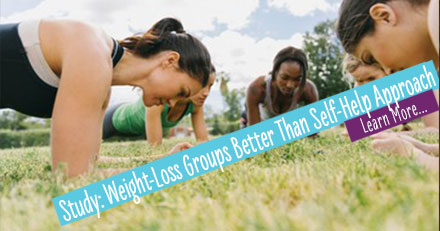 Whether 5 pounds or 50, losing weight can be an uphill battle. But a new study carried out by researchers at Baylor College of Medicine suggests that following a community-based program – in this case, Weight Watchers – will help dieters lose more weight than those who try to do it on their own.

Results of the randomized controlled trial were published in The American Journal of Medicine.

For the study, which lasted 6 months, overweight and obese participants were divided into two groups: a Weight Watchers (WW) group totaling 147 individuals, and a self-help group of 145 people.

The researchers found that on average, those in the WW group lost 10.1 pounds in 6 months, compared with 1.3 pounds in the self-help group.

Professor John P. Foreyt, director of the Behavioral Medicine Research Center at Baylor College of Medicine, talks about the importance of weight loss in the US:

“With the obesity epidemic we are facing as a nation, it’s imperative that primary care physicians and other providers follow the requirements of the Affordable Care Act by screening their patients for obesity and providing, or referring, those who are obese with intensive behavioral interventions.”

He notes that despite guidance from the US Preventive Services Task Force advising physicians to refer obese patients to behavioral intervention, “most Americans try to lose weight on their own rather than choosing scientifically proven approaches.”

The study indicates that the participants in the WW group who used all three “access routes” – meetings, phone apps and online tools – lost the most weight, at 19 pounds on average.

This was defined as attending more than 50% of the weekly meetings and using the mobile apps or online tools two or more times a week.

Those who used two of the access routes lost on average 9.5 pounds, while those using one lost 9.3 pounds.

Researchers say meeting attendance had the strongest link to weight loss, compared with usage of the other tools, suggesting that support from external people is the biggest motivator.

Medical News Today recently reported how President Taft was able to lose 60 pounds by corresponding with his physician in England through written letters over 100 years ago.

“This clinical trial demonstrates that when Weight Watchers meetings, mobile applications and online tools are used in combination, the greatest weight loss is achieved.”

Though the study may sound like a marketing bonus for Weight Watchers – and indeed, it should be noted that the study was funded by Weight Watchers International – the study is indicative of the motivation in being held accountable for weight loss through community-based behavioral counseling programs.

Long-term weight loss is the challenge

Researchers say that the 5% weight loss that those in the WW group were eight times more likely to achieve is significant.

According to the Centers for Disease Control and Prevention (CDC), a modest weight loss of 5-7% can prevent type 2diabetes and improve cardiovascular risk factors.

According to the National Institutes of Health (NIH), more than 2 in 3 adults in America are classed as overweight or obese, and researchers highlight the fact that there is a need for practical treatments that are “effective, accessible and affordable.”

The Mayo Clinic assesses a number of weight-loss diets – including Weight Watchers, which fared well in terms of being flexible, nutritionally balanced, incorporating physical activity and being sustainable over the long term.

However, Mayo Clinic doctors say that though many diets result in weight loss, the challenge is in keeping the weight off. The current study did not indicate whether it involved a follow-up element for those in the WW group to see if they were able to maintain a healthy weight.