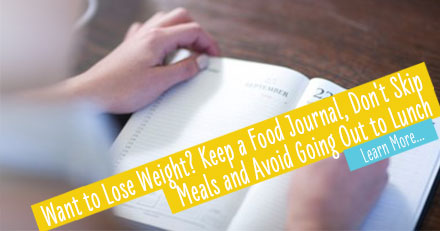 The findings by Anne McTiernan, M.D., Ph.D., and colleagues — from the first study to look at the impact of a wide range of self-monitoring and diet-related behaviors and meal patterns on weight change among overweight and obese postmenopausal women — are published online in the Journal of the Academy of Nutrition and Dietetics (formerly the Journal of the American Dietetic Association).

“When it comes to weight loss, evidence from randomized, controlled trials comparing different diets finds that restricting total calories is more important than diet composition such as low-fat versus low-carbohydrate. Therefore, the specific aim of our study was to identify behaviors that supported the global goal of calorie reduction,” McTiernan said.

Specifically, McTiernan and colleagues found that:

“For individuals who are trying to lose weight, the No. 1 piece of advice based on these study results would be to keep a food journal to help meet daily calorie goals. It is difficult to make changes to your diet when you are not paying close attention to what you are eating,” said McTiernan, director of the Hutchinson Center’s Prevention Center and a member of its Public Health Sciences Division. Study participants were given the following tips for keeping a food journal: • Be honest — record everything you eat • Be accurate — measure portions, read labels • Be complete — include details such as how the food was prepared, and the addition of any toppings or condiments • Be consistent — always carry your food diary with you or use a diet-tracking application on your smart phone

“While the study provided a printed booklet for the women to record their food and beverage consumption, a food journal doesn’t have to be anything fancy,” McTiernan said. “Any notebook or pad of paper that is easily carried or an online program that can be accessed any time through a smart phone or tablet should work fine.”

In addition to documenting every morsel that passes one’s lips, another good weight-loss strategy is to eat at regular intervals and avoid skipping meals. “The mechanism is not completely clear, but we think that skipping meals or fasting might cause you to respond more favorably to high-calorie foods and therefore take in more calories overall,” she said. “We also think skipping meals might cluster together with other behaviors. For instance, the lack of time and effort spent on planning and preparing meals may lead a person to skip meals and/or eat out more.”

Eating out frequently, another factor associated with less weight loss, may be a barrier for making healthful dietary choices. “Eating in restaurants usually means less individual control over ingredients and cooking methods, as well as larger portion sizes,” the authors wrote.

The analysis was based on data from 123 overweight-to-obese, sedentary, Seattle-area women, ages 50 to 75, who were randomly assigned to two arms of a controlled, randomized year-long dietary weight-loss intervention study: diet only and exercise plus diet. Study participants filled out a series of questionnaires to assess dietary intake, eating-related weight-control strategies, self-monitoring behaviors and meal patterns. They were also asked to complete a 120-item food-frequency questionnaire to assess dietary change from the beginning to the end of the study.

At the end of the study, participants in both arms lost an average of 10 percent of their starting weight, which was the goal of the intervention.

“We think our findings are promising because it shows that basic strategies such as maintaining food journals, eating out less often and eating at regular intervals are simple tools that postmenopausal women — a group commonly at greater risk for weight gain — can use to help them lose weight successfully,” McTiernan said.