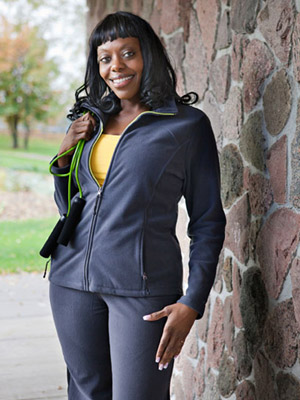 Turning Point: At my daughter Jacynta’s sweet 16 party it struck me that she wasn’t enjoying her teen years like she really should be because of her weight. Plus, I realized that as her mother, I’d never been a healthy role model. So, I decided I’d try to inspire her by getting into better shape myself.

How She Lost It: I immediately started walking a half-mile most days of the week. (Now, three years later, I run five.) I also joined Weight Watchers and totally changed my eating habits for the better. For extra motivation, I bought a bikini and hung it up where I could see it every single day.

It really did keep me from reaching for unhealthy treats. Each morning I’d look at the suit and say to myself, “I am going to wear this and wear it well.” It took me three years to drop the 75 pounds, but now I have a whole bikini collection!

What She Found: My main reason for dieting was to be an inspiration to my teenage daughter and yet I must admit I was still shocked when I did, in fact, motivate her. She got a big kick out of the fact that I entered the Weight Watchers Inspiring Stories of Change contest, and my essay “From Buffets to Bikinis” won one of the grand prizes.

That’s when she became serious about her own weight-loss goals. She began exercising and coming to Weight Watchers meetings with me. It wasn’t about me making her do it—she did it all for herself. So far she’s lost 22 pounds.

Being in control of my weight also showed me that I can take action in other areas of my life. I’d never forgiven myself for getting pregnant and dropping out of college before earning my degree. So when I’d proven I could lose the pounds and keep them off, I thought, “Now’s the time. I’m going to get that bachelor’s degree.” Not only did I earn my BS in nursing, but I also received the highest honors at my school for a graduating senior.