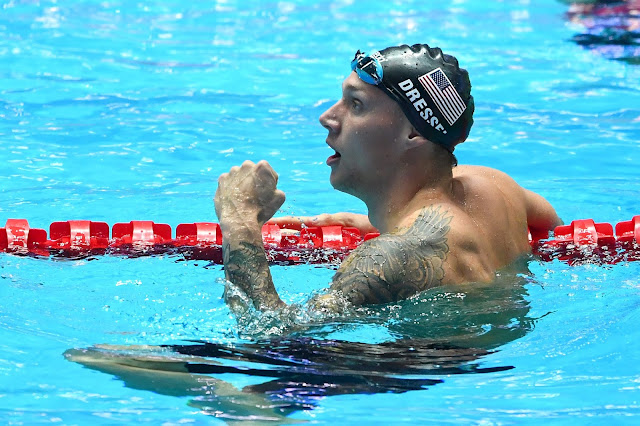 Caeleb Dressel is adding another gold medal to his collection!

On Thursday, Dressel, 24, placed first in the men's 100m freestyle final and set a new Olympic record with 47.02 seconds at the Tokyo Aquatics Centre. Australian Eamon Sullivan had set the record of 47.05 seconds at the 2008 Beijing Games.

"It means a lot," Dressel told reporters after his race. "I knew that weight was on my shoulders. I'd won [Olympic] relay medals but never individual, so it was really special."

The athlete later said it felt "different" to win his first individual Olympic gold medal. "I didn't want to admit it but now that I did it, I can. It's a lot different. You can't rely on anyone else. It's just you and the water, there's no one there to bail you out. It's tough."

This gold medal comes three days after Dressel, along with teammates Blake Pieroni, Bowen Becker and Zach Apple, placed first in the 4x100m freestyle relay on Monday with a time of 3:08.97. Just 1.14 seconds behind the Americans was Italy and 1.25 seconds behind was third-place finisher Australia.

The Americans clocked the fastest time on every leg of the race. Monday's big win marks the 10th time the U.S. has won gold in the last 13 times the men's 4x100m relay has taken place at the Olympic Games.

After the medal ceremony on Monday, Dressel was seen throwing his gold medal to Brooks Curry in the stands.

Curry swam for Dressel in the preliminary heat, and Dressel replaced him for the final round. "[Curry] has got the medal. He has to hold on to it for me until he receives his medal," Dressel told reporters. (A swimmer who competes in the heats but not the final also receives a medal at a later time.)

"I had the easiest job out there because last night I got to watch it on TV," added Dressel, who had been resting during the 4x100m freestyle preliminary heats.

In Tokyo, the Florida native could win six gold medals.

Dressel will be the one to watch in the men's 100m butterfly and 50m freestyle events.