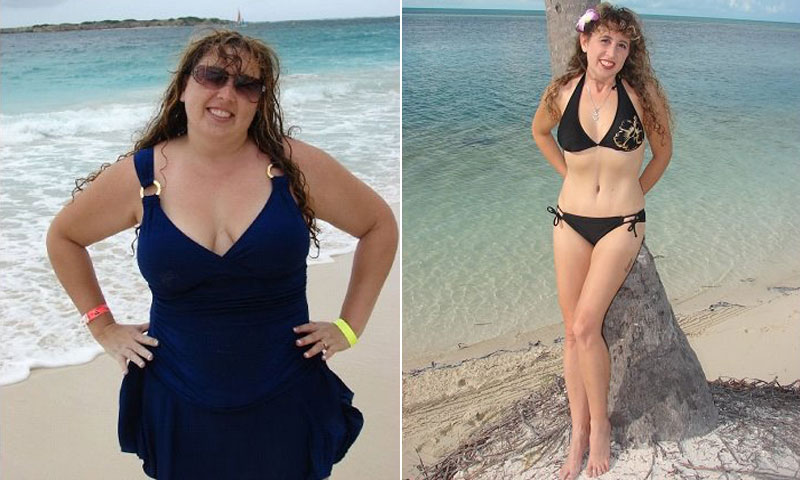 Because of our busy schedules, we were eating out all the time. Add to that the stress of moving in together, buying our first place and planning a wedding. I had no clue how bad things had gotten until I was shopping for a wedding dress. Hello, size 18. I was floored. I always had up and down weight issues, but I had never tipped the scales over 200 or been over a size 14. I went into a depression. It took me until January 2009 to finally decide to do something about it.

Breaking Point: There were two things that made me decide to finally lose the weight. The first was my parents. They have both been diagnosed with type 2 diabetes, and I knew if I didn’t do something about my weight, I would be next! Also, I just couldn’t stand seeing myself in pictures anymore. I know that sounds vain, but it’s the truth. I didn’t recognize myself anymore.

How I Lost It: I found an eating plan that I could stick with, a restricted 1,200 calorie diet. No strange fads where I cut out carbs or fasted or anything like that, just sensible eating and making better choices. I also drank 80 to 100 ounces of water a day. Then, in March 2009, I started at the gym in my apartment complex. I was there two hours every day, doing an hour on the treadmill (walking at first, running would come much later) and an hour of weights on the various machines. By September 2009, I had become a size 4.

Since then, I have become an avid runner. I have completed three half marathons with a fourth coming up this February. And I have continued to keep the weight off. It really is a lifestyle change. I still eat my 1,200 calories Monday through Friday, but I allow myself to eat whatever I want on the weekends as a reward. This was a New Year’s resolution that actually worked! You can do it — and at any age! It just requires a lot of hard work. I turned 40 last July and am in better shape and weigh less than I did in high school!