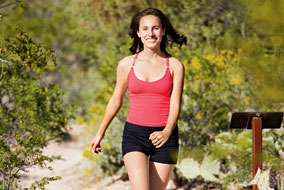 Angelica’s challenge Angelica started gaining weight in her teens when a busy schedule led her to rely on junk food. “I was in theater, so I had to perform while feeling insecure about my body,” she says. By the end of high school, she was up to 138 pounds and didn’t want to get any bigger.

Her new assignment Hoping to counteract her weight gain and energy loss, Angelica started eating healthier foods, but it didn’t help. “It was so frustrating,” she says. “I was sluggish and my stomach was always bloated.” Then, the summer before she left for college, Angelica was diagnosed with celiac disease, a disorder that makes the body unable to digest gluten, a protein found in wheat, rye, and barley. “I had to change my diet to get the disease under control,” she says. “So I used that as a jumping-off point to revamp my whole lifestyle.”

Ingredients for change Before moving, Angelica studied her condition. She knew the cafeteria would be full of foods she either couldn’t eat or wouldn’t want to, so she skipped the meal plan and learned to cook. Once on campus, she made salads, chicken, and veggies in the dorm kitchen. On weekends she went to the farmers’ market to stock her mini fridge with produce, nuts, and lean meats. “In a world of pizza and beer, I was an oddity,” she says. “But I started feeling and looking so much better, I didn’t care.” She began dropping pounds right away—2 a week—and her energy level improved. Though she’d always gone to the gym in her spare time, Angelica now made working out a priority. Soon she was doing cardio and lifting free weights every morning before heading to class. Just two months into the school year, she was 20 pounds lighter.

Fringe benefits Before long, Angelica’s healthy habits started rubbing off on her friends. “My roommate goes to the gym with me most mornings,” she says. “And people in my dorm ask for food advice all the time. They couldn’t believe the change in my body—and I almost couldn’t either.” All of this inspired Angelica to work even harder. Before the end of her first semester, she was down to 110, and all traces of the insecure teen she’d been were long gone. “I thought having celiac disease would limit me, but instead, having to be mindful about nutrition actually opened up my world,” she says. “For the first time, I can say I feel really great. There’s no way I’m ever going to give that up!”

Shift your priorities “I squeeze in exercise every morning, even if it’s a walk or a few push-ups. Just 10 minutes makes a big difference in how I feel the rest of the day.” Don’t stress about sweets “I used to think life without a brownie would be the end of the world. Now I have a piece of whatever treat I want and move on!” Experiment with snacks “When I changed my diet, I didn’t just cut calories, I also tried new things. Figs and walnuts or a baked sweet potato with honey can satisfy a sweet craving too. New combos keep food exciting.”