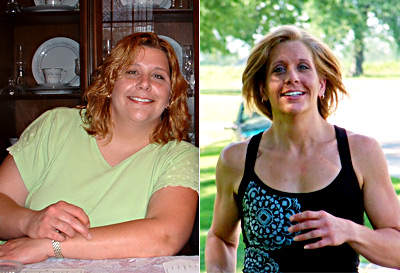 Time at current weight: 1 year at 160 pounds or less

By age 29, Brenda Turnbaugh had gone through three surgeries for the three disks that ruptured in her lower back during her early 20s. The pain restricted her movement, so for the next decade, she continued packing on pounds and turning to food for comfort. By 2008, she weighed 263 pounds, and couldn’t walk up two flights of stairs and across the office parking lot without huffing and puffing.

In September 2008, the administrative assistant from Fowler, Ill., realized she had to bid farewell to her vices—unhealthy eating, drinking, and smoking—or else she was going to die. It was after the season premiere of The Biggest Loser that Brenda, a devoted viewer of the show for five seasons, decided to join the Biggest Loser Club. Though she admits she once had doubts about the group, the BLC introduced her to encouraging experts and “lifelong friends” who keep each other accountable.

She started exercising and eating as healthy as possible, and the weight started to come off. She quit smoking and signed up for her first 5-K. After crossing the finish line in May 2009, she was hooked. She joined a local run club, which helps keep her active and plugged into the community, and stays motivated by race training. She used to worry that any exercise that would burn enough calories to help her lose weight would exacerbate her back condition. Now she knows better. “All I was doing was letting the excess pounds compress the spinal fusion and make it worse.”

Brenda enjoys inspiring others to make small changes towards a healthier lifestyle. And thanks to the Biggest Loser Club, she can pull on a pair of size 6 jeans and zip them up—without having to hold her breath.

Reach out! Connect with others online. “The support you will receive will help you go far—not only in weight loss, but in finding yourself and maybe even the confidence that you always wanted.”

Follow the 80/20 rule. “Allowing yourself a treat or an occasional ‘off’ meal will not destroy all the good work you have done. If you stay on the plan at least 80 percent of the time, you will lose weight.”

Be open-minded. Find a form of exercise you enjoy. Brenda was shocked to discover she loves running. She completed her first half-marathon in 2010 and plans to train for the Christie Clinic Illinois Marathon in April 2011. “Start now and maybe you can meet me there.”