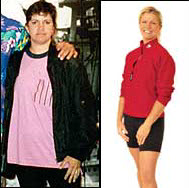 Other Accomplishments: Sharing her experiences with kids at the nursery school where she works has helped them to be more active

One day at Wal-Mart, I was having trouble finding my size, so I asked a salesclerk for help. She scanned my squat 5-foot-4-inch, 190-pound figure and said, “I’m sorry. We don’t carry your size.”

I still remember, 12 years later, how those words stung. Of course I’d known I was overweight, but hearing it from a stranger in public felt like a kick in the gut. My eyes filled with tears, and I rushed out of the store.

Believe it or not, I was so skinny as a kid that my nickname was “Bony.” I ate whatever I liked–Doritos, fried chicken, and twice-baked potatoes heavy on the cheese and sour cream–without gaining an ounce. But when I became pregnant at 22, I put on 50 pounds because I took “eating for two” literally, even after my daughter was born. Five years later, in addition to a second child, I gained another 25 pounds that wouldn’t budge.

When I tipped the scale at 187, I was so frustrated I smashed it into the trash. Yet I felt powerless. I tried dieting and once even lost 30 pounds, but gained 45 back because I just couldn’t find the motivation to stick with it–until that dreadful shopping trip.

From Wal-Mart, I drove to McDonald’s and downed double orders of McNuggets and fries, hoping the food would make me feel better. As I looked at the empty containers strewn across my car seats, I felt sick and realized I desperately needed help.

That night, I called Weight Watchers. I had seen the company’s ads, and the testimonials from real women convinced me to try its program. Two days later, I went to my first meeting, where I basically learned that everything I had been doing–eating huge portions of high-fat, high-calorie foods–was wrong. Following the program’s advice, I started to substitute water for sugary drinks and ration my snacks. Instead of an entire bag of Doritos, I would eat only a handful. Weight Watchers recipes and guidelines, such as broiling or baking instead of frying, helped me cook healthier meals. And to satisfy any hunger, I ate more fruits and veggies, which I actually liked.

In just 2 weeks, I lost 6 pounds. My husband, Jim, helped with the kids and dinner on nights I had Weight Watchers meetings. Linda LaFontaine, my boss at the nursery school where I work, became my biggest supporter. She’s a competitive runner who had long encouraged me to exercise. Now she offered to set up a running program for me as soon as I lost 15 pounds.

After 2 months, I was ready for my first run at a local trail. My heart was racing, more out of fear of disappointing Linda and of being embarrassed than anything else.

After a brief “this is not a race” speech, Linda slowly trotted down the tree-lined path while I shuffled behind, huffing and puffing. The route was only 1/4 mile, but halfway through, my legs felt as heavy as oak trees and my knees as creaky as old hinges. I wanted to quit. But I kept lumbering along because I wanted even more to succeed. “You did it!” Linda screamed as I reached the end of the trail.

From that day forward, once a week I went to Weight Watchers, and every other day I ran with Linda. Running not only reduced my stress but also helped me think of food as fuel, which helped me cut out junk.

After a month, I could run a mile, and I had lost another 5 pounds. That’s when Linda suggested I set a goal to do a 5-K (3.1 miles) race as a way to stay motivated.

Two months later and now down to 160 pounds, I stood behind about 150 other racers. I felt like an intruder in a foreign land until the starting gun startled me forward. Step by step, I made my way along the asphalt street. At the halfway point, my feet were hurting, but I looked at all the shoes of the runners in front of me and pushed on. Although I was one of the last to finish, I’d never felt prouder.

My next goal was a 10-K. On race day, 3 months later, I was down a total of 45 pounds, to 145. One year after joining Weight Watchers, I hit my weight loss goal–60 pounds–and celebrated by running a half-marathon (13.1 miles). From there, I ran a marathon; learned to mountain bike, kayak, and rock climb; and began competing in adventure races, team events consisting of various activities. The body I once hated is now taking me to places such asBrazil,Switzerland, andFijito race. Who knew a trip to Wal-Mart would be my ticket to see the world?

Size Up Your Portions

When Ronchetto learned what sensible amounts of food were, her waistline began to shrink. To help you avoid portion distortion, here are some examples of healthy serving sizes.