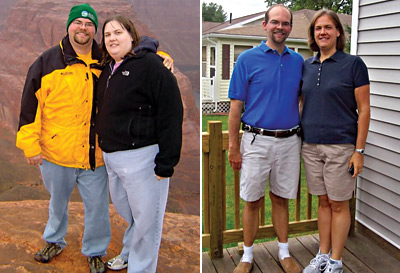 Two New Yorkers motivated each other to walk off the weight and adopt a diet rich in lean proteins, fruits, and vegetables

Benjamin and Janet Hankins from Morrisonville, NY, each weighed well over 200 pounds, and in fall 2009, they found themselves at risk for a number of unwanted health issues. They decided to fight back the scale together and enrolled in a local weight loss program. Soon, the pounds started melting away, and their motivation continued to soar. Since then, they lost a total of nearly 200 pounds and now enjoy an active lifestyle free from the medical problems they once battled.

In spring 2009, a doctor told Benjamin, an environmental engineer, he was at risk for developing cirrhosis due to fatty build-up in his liver. “Wanting to extend my life prompted me to start working on my weight,” he says. When Benjamin mentioned to Janet, a school counselor, that his co-worker found success through Health Management Resources, a private weight loss center, she was excited to try it. At the time, she was prediabetic with high cholesterol, and could not walk upstairs or down the street without feeling winded.

For the first phase of the program, Janet and Benjamin could eat only HMR products. (She repeated this 13-week stage twice.) He traded his three big meals a day for seven to eight smaller ones. “A lot of people think you have to starve yourself in order to lose weight, but the opposite is actually true,” he says. “Food is not the enemy. If I eat the right things, food will help me lose weight.”

Next, they added a minimum of 5 cups of fruits and vegetables to their diet each day. Then they gradually incorporated nonfat yogurt, nonfat cottage cheese, lean meats, and whole grains into their meals.

The Hankins also burned at least 300 calories a day as part of the program. They decided to start walking, which proved to benefit their physical and mental health. “Now we actually enjoy going for a walk and talking about our day. It has brought my wife and I closer as we have the ‘us time’ that we need to have a great relationship,” Benjamin says.

The couple attended weekly meetings at their local HMR clinic and scheduled midweek calls with a health educator to report progress and discuss any challenges. They also kept food journals, which helped identify patterns. For instance, Benjamin noticed that he would maintain or lose weight when he ate more vegetables than fruits, but he would gain weight if the ratio were reversed. He’s learned to adjust and tries to eat two vegetables for every fruit.

“There is nothing better than working together as a team,” Janet says. When one person wants to eat something unhealthy, the other asks, “What is your plan to balance out that choice?” And if someone doesn’t want to take a walk, the other will point out that the dog still needs to go for a walk. That usually does the trick, because as soon as they start walking they feel better.

Less than a year into her weight loss journey, Janet accomplished a huge goal: She walked the Adirondack Marathon in 6 hours, 33 minutes. “I never thought I would be able to walk a 5-K when I was heavy, let alone complete a marathon.” One of Benjamin’s favorite memories coincided with their third anniversary when they hiked 21 miles in a day on a trip to the Great Smoky Mountains.

Start training for a 5-K today!

Just start walking. It doesn’t matter where you go as long as you’re moving. Go down the street and meet your neighbors. Stroll through the aisles of the grocery store. Take the dog out. —Benjamin

Celebrate the small successes. I found enjoyment in the little things, like shopping for new clothes in a smaller size. Remember that it took time to gain weight, and it takes time to lose it. Don’t focus on the long-term goals, but focus on short-term ones so you don’t get discouraged. —Janet