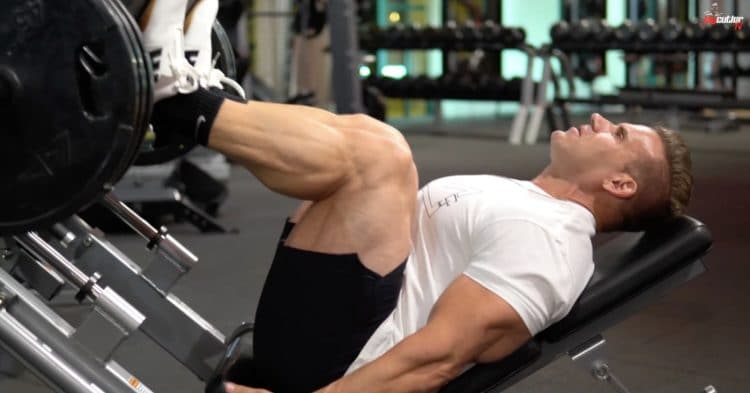 One of the things that made four-time Olympia champ Jay Cutler such a force to be reckoned with onstage, was his killer legs. Now he breaks down some exercises that you can use, to get your hamstrings as shredded as possible.

When it comes to top tier bodybuilders go, few are as elite as Cutler was during the prime of his career. He was even able to find a way to stay healthy and in phenomenal shape, well into his retirement from competition, providing inspiration to current and future generations of athletes alike.

Recently, Jay decided to share some of his best tips to help you get a solid pump in the gym. Posting to his YouTube channel, the former champ broke down his five best exercises to get shredded hamstrings, breaking down how each one helps.

The first exercise that Jay Cutler breaks down is a variation of the leg press, which requires a higher foot placement. However he says that this is something that not everyone will be able to do, depending on the equipment available at your specific gym.

“Instead of focusing on the quads, and this is a mind to muscle connection thing that I try to tell people it takes time to learn, but what I’m going to do is I’m going to drop my quads out of it and I’m going to put a lot of the pressure onto the heels,” Jay said.

This is a workout that Cutler said is usually a replacement for stiff legged deadlifts. He does it for twelve reps with three or four sets to engage the hamstrings.

The first of three rounds of leg curls was done while standing, with Jay Cutler saying this is his favorite machine. He focuses on getting a strong bend of the knee to engage the hamstrings even more.

Again, this is done for twelve reps on each leg, increasing the weight a little with each set. He did not specify how many sets he chose to do, but it was likely somewhere around three.

Next came the seated leg curls, which is something Cutler is very familiar with. He says that for someone with shorter legs like his, this is a great workout to boost hamstrings.

“I think the seated leg curl can be very beneficial to people, depending on your structure,” he explained.

A trend is beginning to form, as Cutler once again does this exercise for twelve reps, and three sets. At this point, it is clear that his legs are beginning to show signs of the pump, and his hamstrings were looking intense.

Jay Cutler notes that a lot of people look at the lying leg curl as a great way to build hamstrings, and he says that is not wrong. It is just not the only way to improve the hamstrings.

Beginning at a medium weight of 110lb, he knocks out twelve reps before increasing the weight for the other two sets. He says that he can feel the blood pumping through his legs.

For the stiff-legged deadlifts, Cutler uses dumbbells instead of a barbell with weight. He notes that some people wear belts to protect their back on this exercise, but he does not do that anymore because he does not lift that heavy.

Again, Jay knocks out three sets of this exercise, but only ten reps in each set this time. He also explained that he does not go all the way standing with them, keeping a squeeze in his hamstrings the whole time.

To conclude, Jay Cutler explained how important hydration is, not just for hamstring workouts but for your health in general. This is a solid leg day session from one of the best to ever do it.