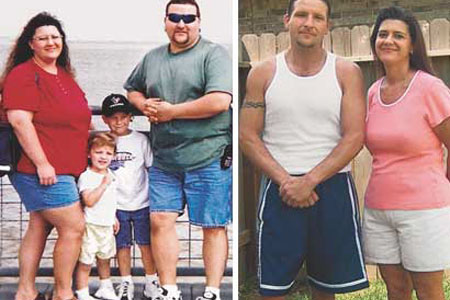 The Gain: Barbara had always been about 75 pounds overweight. “I just figured I was meant to be heavy,” she says. When she and Michael got married, she weighed 190 pounds. Eight years of indulgent eating and three pregnancies later, Barbara weighed 235. Michael, who’d packed on a lot of pounds after college, weighed 290 by then.

The Change: In December 2004, Michael read about the South Beach Diet in a magazine. Barbara had tried diets before with little weight loss success, but the pair decided to give this one a shot.

The Life: The Griffeys stopped eating out and started cooking all their meals at home. They focused on vegetables, fruit, and low-fat dairy products and replaced fried chicken with baked, broiled, or grilled lean protein. Barbara gave up her bad habits: “I used to have a few bites of the kids’ hot dogs when I cleared the table,” she says. “I started tossing the leftovers.” The couple also began walking and working out on the elliptical trainers at their gym for an hour three nights a week. Getting in shape as a team made all the difference. “I couldn’t have lost the weight without Barbara by my side,” Michael says. “We kept each other on track.”

The Reward: Within 8 months, Barbara and Michael shed a combined total of 185 pounds. “I’m smaller now than I was in my 20s,” Barbara says. “And losing weight with my husband has made us closer than ever.”

Stack your spice rack. “Season your food with herbs and spices. They add flavor without fat.”

Get moving. “If you’re new to exercise, start by doing just 15 minutes. Increase that by 5 minutes each session until you reach an hour.”

Look back. “Keep a ‘before’ picture in your wallet to remind you of what you don’t want to go back to.”