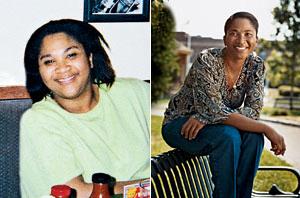 Angela Myles’s father used to call her “Oprah” because her weight fluctuated so much. But when a doctor told her in August 2002 she was diabetic, the 43-year-old had to get off her yo-yo cycle. A dietitian put Angela on a 1,200-calorie diet. She traded ice cream for frozen yogurt and syrupy canned fruits for fiber-rich dried papaya. Angela never felt comfortable at the gym, so she built up to walking an hour at the mall, four days a week.

As she lost weight, she was able to cut back on her diabetes drugs. And, finally, two years after her diagnosis and 63 pounds lighter, she was able to stop taking the medicine completely. “My doctor had tears in her eyes,” Angela says. “I was the first person she’d ever been able to take off diabetes medication. It was a very emotional moment for both of us.”
Before Now
Pounds: 220 157
Size: 20 10
Total lost: 63

Her advice:
Cheat on weekends. Angela gives herself 300 extra calories a day for splurges on Saturdays and Sundays. Her favorite cheat meal: eggplant parmigiana at Olive Garden.

Her biggest change:
Giving up her late-night bowl of ice cream. How’d she beat evening nibbling? “I would make myself go to bed whenever I got hungry. Sometimes I’d go to bed at 8!”

How she stays on track:
Angela buys a 32-ounce bottle of Evian on her way to work—drinking water helps her feel full during the day. “I realized when I don’t have it, I start to look for things to munch.”

Her wish:
Angela told us she’s been stuck in a hairstyling rut. Even though she’d lost a lot of weight, she still didn’t feel she was making the most of her new looks. So, we’ve arranged for Angela to get a fabulous makeover—with a brand-new ‘do.

Her Motivation:
Her 13-year-old son, Joshua. “All I could think about was not being here for him,” Angela says. “I want to be around to see him grow up.”