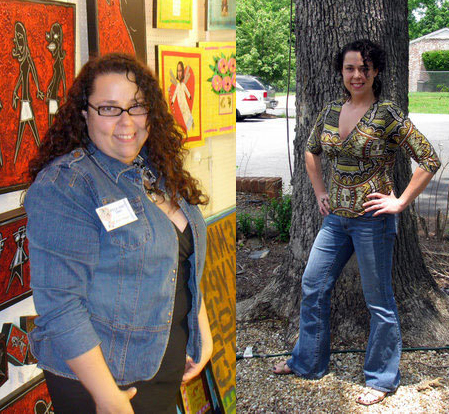 How long she’s kept it off: 8 months. She started September 2007 and reached her goal November 2008.

Personal life: “I own an art gallery and boutique called Lola Art Gallery & Gift Shop in Historic Roswell,” says Wegert. “I live with my husband, Scott, and our Boston Terrier, Zeus.” They live in Roswell.

Turning point: In September 2007, she had an annual physical. “I received a scary report that I had high cholesterol and high triglycerides,” she says. “I did not want to go on medicine for that, not at 34.” Fear motivated her to change.

Diet plan: “I started eating smaller portions. I should have known that was the key,” she says. I always eat a protein and a carb every 2-3 hours.” Breakfast is peanut butter and banana on whole wheat toast followed by a mid-morning smoothie. Lunch is a tuna sandwich and then black bean soup mid-afternoon. Dinner is baked chicken, brown rice and vegetables. At night, she has whole grain cereal microwaved with peanut butter. “It tastes like a peanut butter cookie,” she says.

Exercise routine: She lifts weights and does cardio 4 to 5 times per week. For two years she faithfully cycled at spin classes 3 to 4 times per week. But despite the vigorous workout, the scale wouldn’t drop until she decreased her portions and increased her meals to 5-6 per day.

Biggest challenge: “I have been heavy most of my life. I have always wanted to drop the weight but for all the wrong reasons,” she says. “My biggest challenge was finding a strong enough motivator. I finally have one and I am riding that horse to town!”

How life has changed: Recently, her triglycerides dropped from 159 to 114 and her cholesterol dropped from 210 to 126. “Most people want to get back to how they looked in high school,” she says. “I am in better heath than I was in high school. I am like a shinny new apple &mdash; I have never been so happy.”