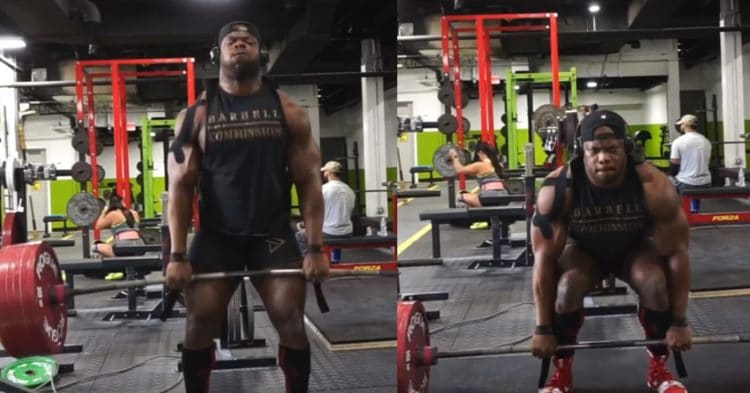 Kevin Oak is known for pushing the pace during training sessions but still finds a way to make unfathomable weight look like child’s play. The powerlifter took to Instagram and shared a recent deadlift showing him plow through 5-reps of 771lbs in a vigorous manner.

A world record holder in his weight class of 242lbs (110kg), Oak notched a gargantuan squat lift of 832 lbs (377.5 kg) back in 2018 to etch his name in the history books. Then, once again sent shockwaves through the sport when he broke his record two years later by smashing through an 860lbs (390kg) raw squat lift 2020 at World Raw Powerlifting Federation (WRPF) Hybrid Showdown II. oak holds the second heaviest ever total in the 110-kilogram weight class, which is 987.5 kilograms (2177.1 pounds).

Kevin Oak remains a potent force in the powerlifting community. As a former sprinter, Oak’s background in running track and field has clearly improved his overall endurance throughout his time competing as a powerlifter.

After sharing his lift on Instagram, it’s safe to say the powerlifting staple is in incredible shape. Not only is Oak deadlifting a massive amount of weight, but the speed of his repetitions illustrates that he is taking a well-rounded approach to training.

On Monday, Kevin Oak shared a deadlift on social media where he powered through five reps of 771lbs (350kg) in rapid succession.

With growth evident in his recent lifts, Kevin Oak’s ability to press weight and then fire off repetitions is a skill that will translate into bodybuilding if he ever chooses to explore that career route. Nevertheless, his impact in powerlifting remains decisive and the world record holder will certainly have his eyes on the history books with the new year approaching.

A day before that, Oak hits a huge squat of 705 lbs on the safety bar.

After witnessing Oak deadlifting 771lbs five times in practice, it appears the powerlifter is poised for another big year. Determined to have a 2022 season filled with world records and achievements, Kevin Oak’s conditioning makes him a definite force in any powerlifting competition on the horizon.