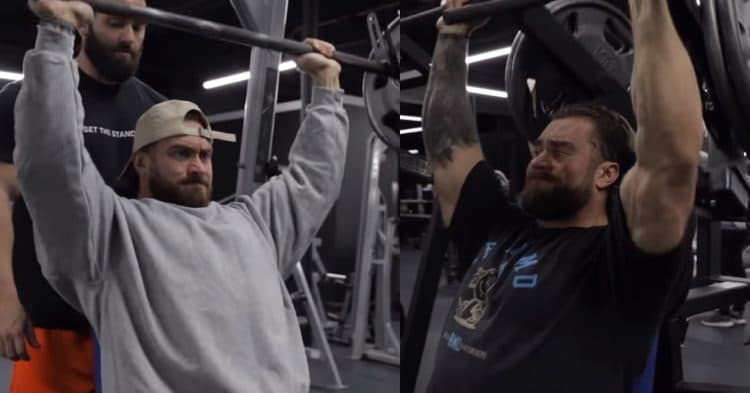 Three-time Mr. Olympia Classic Physique winner Chris Bumstead recently shared his shoulder day workout. Bumstead had taken much-needed time off after 2021 Olympia to let his body and mind recover from the stress of bodybuilding. However, a recent battle with Covid-19 infection left Chris Bumstead with a massive weight loss.

Almost one year removed from the 2022 Olympia, Chris Bumstead has started his off-season training with a goal to fully recover and prepare his body to retain the Classic Physique title. Although he has returned to the gym, Chris Bumstead is taking a cautious approach and smaller steps towards recovery. In order to keep his fans updated with his road to Olympia, Bumstead recently shared his shoulder day workout on his YouTube channel.

At the beginning of the video, Chris Bumstead revealed that he has faced shoulder issues for almost three years. Bumstead is trying to heal them with peptides, stem cells, and proper rest. However, the slow recovery has frustrated him a little bit in recent times. With that being said, Chris Bumstead started the shoulder day workout with a warm-up exercise.

Bumstead stated that setting the shoulders back at the beginning of the workout helps him reduce the shoulder pain. Therefore, he started the workout by warming up the rear delts and performing single-arm rear delt cable flys.

The shoulder pain is the primary reason why the Smith machine is Chris Bumstead’s main movement for shoulder press. The 26-year-old explained that doing shoulder press with dumbbells or barbells takes away the stress he actually wants to put on his delts. On the other hand, the Smith machine allows him to perform the workout to failure and achieve gains.

Chris Bumstead performed 2 sets of 8 to 10 reps on the Smith machine shoulder press. Although he did not get the pump he usually gets, The Olympia Classic Physique champion has made progress of 50lbs on weights since returning to the gym after battling with Covid-19.

Chris Bumstead then performed 2 sets of seated dumbbell lateral raises to failure with moderate weights (30lbs). While most of us perform the lateral raises while standing, Bumstead explained why he prefers to do seated lateral raises.

“For some reason, when I do dumbbell lateral raises standing, it hurts my shoulders a lot more. But I found if I sit back, relax my wrist a little bit more so it’s like slack here… I keep my arm bones straight, it puts a lot more tension on my actual delts, isolates it way more…” Chris Bumstead said.

While he is not satisfied with the amount of weight he is lifting, the 26-year-old is leaving the ego aside to make proper gains after recent health issues.

Next up were two sets (8 reps each) of seated machine shoulder press with a heavy load. Chris Bumstead stated that he prefers to use the machine for shoulder press as it provides better control than barbells or dumbbells.

Lateral Raises on the Machine

Chris Bumstead then went on to perform his first drop set of 2022 on the lateral raises machine. After performing the first set to failure, Bumstead started the second set without much rest and reduced the load midway to finish the set to failure.

The shoulder day workout came to an end after three sets of machine reverse flys to work the rear delts. Chris Bumstead performed the sets of this workout to failure and concluded the workout.