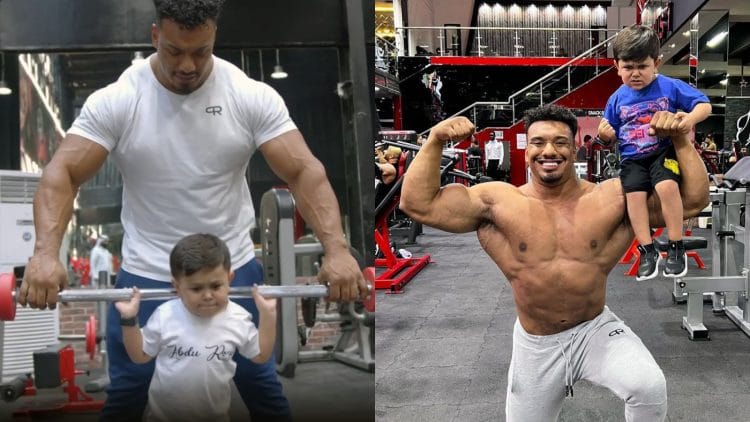 Powerlifter Larry Wheels recently tutored a unique student in powerlifting. A powerlifter, bodybuilder, and arm wrestler, Larry Wheels is best known for wrecking powerlifting records in the gym. He recently welcomed Tajik singer and social media star Abdu Rozik at Noah’s Gym in Dubai. Wheels taught Abdu Rozik the basics of powerlifting throughout the session that also had some lighthearted moments. The video of this training session was shared on Larry Wheels’ YouTube channel.

For someone that has never attempted lifting weights before, Abdu Rozik got the privilege of learning the basics from just the right person. However, Larry Wheels gave a less than comforting yet funny message to the 18-year-old in the beginning and said:

“I’ve been doing this for like a decade now and I think I’m one of the best guys to teach you. So I hope you don’t get hurt. I do have a history of injuring my training partners but I think you’re in good hands today!”

Larry Wheels started the training session with a bench press and demonstrated the technique for Abdu Rozik to understand. The 18-year-old did surprisingly well for the first day and cranked out a few reps on the regular bar. Larry Wheels advised Abdu Rozik to lower the bar to his chin rather than chest. Abdu then completed another short set as Wheels supported the bar throughout the set.

“That (bar) was 15kg, he weighs about 18kg. We can say it was a bodyweight bench PR. Off to a good start!” Larry Wheels said.

Larry Wheels next proceeded to teach Abdu Rozik the basics of barbell squats. Wheels told him to start the movement by shooting the hips back while carrying the bar on his shoulders. Rozik performed one set of five reps that gave him a visible confidence boost to crank out another set for six reps with furious intensity.

Larry Wheels next taught Abdu Rozik to perform a deadlift which many people refer to as powerlifting in its purest form. Understandably, Rozik struggled to employ the correct technique but performed one set before trying dumbbell curls. The workout concluded after two sets of dumbbell curls. Abdu Rozik sang a few lines at the end of the video that was arguably the sweetest part of the entire video.

Abdu Rozik is an 18-year-old singer and social media star from the Central Asian country of Tajikistan. He is primarily known for his talent for singing Tajik Rap songs. Abdu Rozik has the appearance of a five-year-old due to an unfortunate childhood incident. Born in the Gishdarva village of Tajikistan, Abdu Rozik contracted Rickets in childhood. His parents could not afford the treatment which resulted in stunted growth.

However, that has not stopped the Tajik from becoming successful. Rozik moved to Tajikistan’s capital Dushanbe to pursue music after Tajik Rapper Baron noticed him and convinced his parents. The 18-year-old primarily shares his content on the YouTube channel Avlod Media and his personal Instagram account.

Rozik grabbed the headlines in 2021 due to his alleged MMA fight against Dagestani social media star Hasbulla Magomedov AKA ‘Mini Khabib’ arranged by Chechen MMA fighter Tamaev. The video of their heated press conference went immediately viral and their rivalry became one of the most popular topics in the combat sports community on the internet. (h/t MiddleEasy)