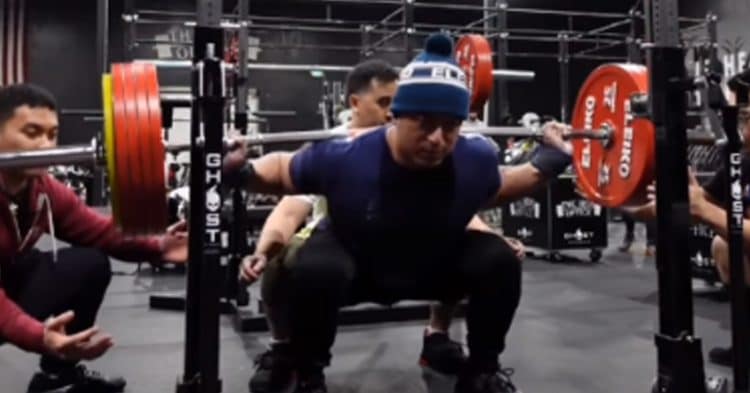 Jonathan Cayco is moving some serious weight in training, and claiming some personal records alongside. The current IPF World Champion in the 93 kg category showcased a very impressive squat set from a recent training session, on his Instagram page. In the video, we are able to see Jonathan squatting 250 kg (551.2 lbs) for 8 repetitions, which is his new rep PR. Cayco’s repetitions looked very consistent throughout the whole set, and he only used a lifting belt and wrist wraps to aid him in the lift.

Jonathan squatted the same weight just a few days ago, but he was not able to do more than 5 reps. Jonathan did not disclose his current bodyweight, but regardless of that his recent squat progression is very impressive.

Jonathan has accumulated some great success throughout his powerlifting career. His most recent accomplishment is winning the 93 kg category of the 2021 International Powerlifting Federation (IPF) World Classic Championships, which took place from September 29th to October 3rd, 2021, in Halmstad, Sweden. In addition, Jonathan managed to break two World Records in the same competition. His results were as follows:

You can watch his every lift here:

Related: Jonathan Cayco Does A Dance, Then Wrecks A 735lb Deadlift

Jonathan is also a 2x American national powerlifting champion, as he has won both the 2019 and 2021 editions of the USAPL Raw Nationals in the 93 kg category.

It is also worth noting that Jonathan excels in the bench press event to the point that he even got the nickname “Mr. Bench”. Jonathan holds the current official bench press world record, but has lifted more before. His Unofficial PR is 247 kg (545 lbs).

At the 2021 IPF World Championships, Jonathan’s weakest event was the squat, and he is focusing a lot more on it now. Judging by his new rep PR, Jonathan might surprise us with a massive squat performance at his next competition, although it is not known when he will be competing again.