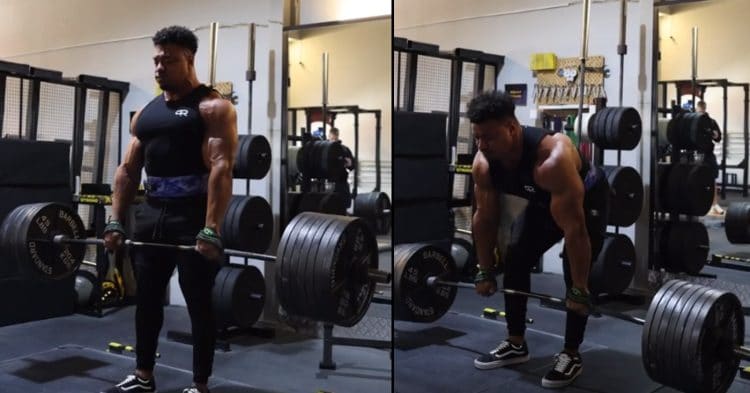 Larry Wheels is a known commodity in the world of powerlifting. The decorated powerlifter took to social media and showed off a mammoth deadlift of 675lbs for 10-reps in a recent post.

Wheels is a multi-talented athlete. In addition to his impact in powerlifting, Wheels has tested his resolve in bodybuilding, trained in strongman, and more recently, arm wrestling. While Wheels has only dabbled in the new sport, it’s refreshing to see a powerlifter attempting to compete outside of their comfort zone.

Just around a month ago, Larry Wheels was tasked with taking on Brendon Allen in an arm-wrestling match. In the end, Larry Wheels lost. As a result, Wheels endured his second defeat in the sport of arm-wrestling. Despite taking the loss, with time and experience, the powerlifter can still make waves in the rising sport.

Going back to his roots, Wheels took to Instagram and the powerlifter turned in a massive deadlift rep session. The powerlifting phenom deadlifted 675lbs for ten clean reps. Following the intense workout, Wheels still appeared fresh and full of energy.

READ: Larry Wheels Reveals His One Workout To ‘Develop A Huge Thick Back’

The lift was undoubtedly impressive. Larry Wheels is showing that even with extracurricular activities like arm-wrestling, powerlifting is his bread and butter. While Larry’s deadlift of 675lbs is impressive, the powerlifter has been known to push the limits of his physical strength. In Nov. of last year, Larry glided to a new personal record when he deadlifted 765lbs for a total of 7-reps.

Larry Wheels is the type of competitor who is constantly trying to one-up his own performances. The powerlifting phenom also snatched a PR on the shoulder press last year. Wheels managed to shoulder press 187lbs and did so for 6 reps.

Wheels is a fierce competitor and showed as much throughout his powerlifting career. While the pandemic relocated or shuttered many major powerlifting shows, it appears Larry Wheels is getting to work in an effort to make a dramatic return to competition. Prior to his quad injury, Wheels was set to appear at the powerlifting stage but was unable to compete.

While Larry has proven himself in multiple facets of competition, it’s clear that the young upstart does his best work inside of the realm of powerlifting. With his recent social media share, Larry Wheels’ deadlift of 675lbs for ten hard reps looks fast and explosive.