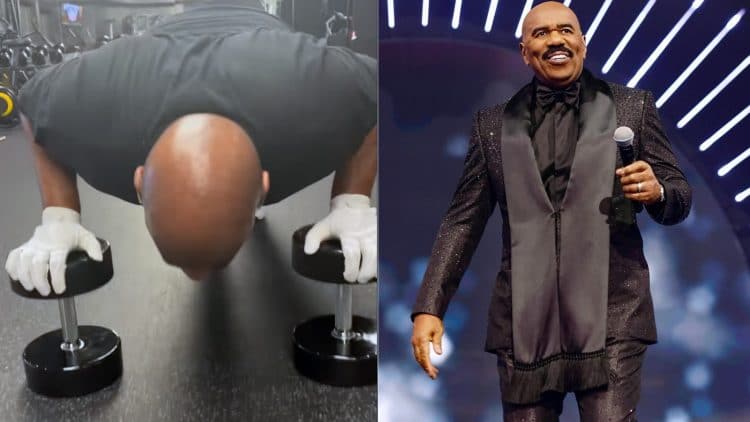 American TV presenter and actor Steve Harvey has maintained great health into his sixties. Lack of connection with the younger generations through effective use of social media is fairly common among celebrities of his generation. However, Harvey is an exception and he recently posted a short workout video on social media that created a lot of buzz in the comments section, albeit for the wrong reason.

In the video posted on Steve Harvey’s Instagram account, he enters the frame to crank out a set of push-ups using dumbbells for additional depth. As soon as Harvey completed the set of around 10 push-ups, he looked at the trainer to confirm the number. Instead of confirming the actual number, the trainer responded ‘five’, presumably to trick Harvey into pushing his limits. At the end of the video, Harvey’s coach joked about Harvey doing fewer push-ups than what appeared on the camera.

While the video was posted to show Steve Harvey’s workout, it got netizens’ attention for a completely different reason. As Harvey performed the push-ups, the cameraman moved the camera along with him. The camera person’s unusual recording style became the most highlighted aspect of the video and got quite a few reactions in the comments section.

Here are some of the witty comments:

“The cameraman has me dizzy. Great Workout.”

“Someone needs to learn how to record.”

“You need a new camera person.”

While Instagram users directed many comments towards the camera person, a lot of people also reacted to Harvey’s push-ups and coach’s method in the comments section:

“Thanks for the motivation Big Brother”

“Your trainer. Those are the kind of trainers everyone needs. “It’ll be alright”

“Work ethic at its best. This is called real inspiration”

“Trainers always ask for “One More”

Steve Harvey is a notable television show presenter, actor, businessman, and former stand-up comedian. He currently hosts popular shows The Steve Harvey Morning Show and Family Feud along with others. In addition to that Harvey also hosts the Miss Universe beauty pageant.