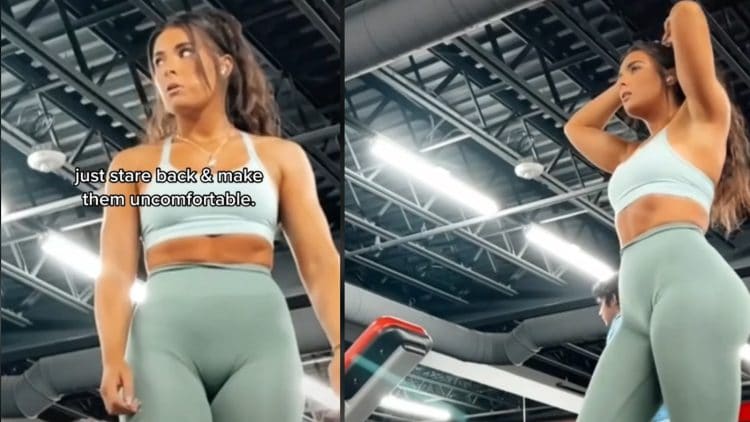 TikToker and fitness model Makayla Anisa shared a viral moment on the streaming platform that involves a man creepily leering at her while she is working out at the gym. After witnessing the stranger staring at her, Anisa opted to give the creep a taste of his own medicine and began to stare right back at him.

According to the fitness model, the man ogled her while she was lifting weights. During her workout, she realized a stranger was staring at her. After seeing a strange man look her down while lifting, the 23-year-old decided to stare back and finish her set anyways.

Makayla Anisa issued a response to the creep on TikTok after the awkward interaction took place.

“I just have to say… if you’re at the gym & some creep won’t stop staring and it’s making you uncomfortable, just stare back & make them uncomfortable.”

Following the awkward encounter, Anisa is adamant that nothing will stop her from getting in a good workout at the gym.

“absolutely no one will be ruining my workouts thank you #dobetter #gymtips” Anisa posted.

Several women have taken to TikTok and voiced their concerns about ‘creepy men’ making unwanted advancements while they are working out. Weeks ago, a female TikTok user alleges that a gym creep followed her home after her visit to LA Fitness and attacked her. The problem appears to be widespread and many people seemingly swarmed Anisa’s comment section to condemn the man’s actions.

Related: Female TikToker Found a ‘Life Hack’ That Keeps Men From Bothering Her At The Gym

One person responded by saying, “This is exactly what I do!” the commenter said.

Another commenter seemed surprised by the interaction and offered up what she chose to do about the issue.

“I go to an all girl gym for this reason. Sad we even have to think about this. ” the poser said.

Another TikTok user indicated that this problem happened to their daughter too.

“My daughter came home in tears because a group of creeps were staring and whistling at her at the gym. the TikTok user shared.

♬ Pope Is a Rockstar – Sales

The TikTok video has since accumulated 1.6 million likes. Fortunately, unlike some of the users before her, the man didn’t follow Anisa home after she finished her workout.

who wants to do that. #confidence #gymthoughts #workout

While the TikTok user was fortunate enough to catch the perpetrator red-handed, the ongoing issue is unresolved and women are still grappling with unwanted advances by men at the gym.